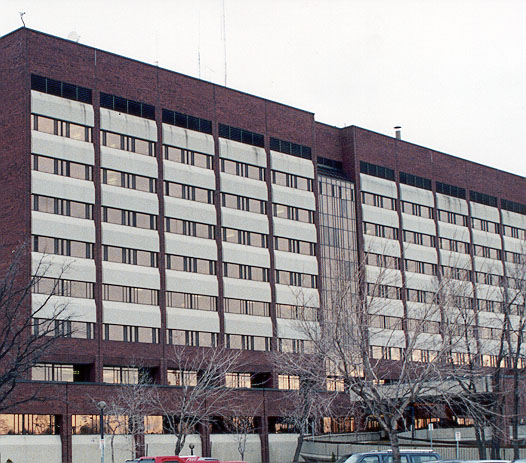 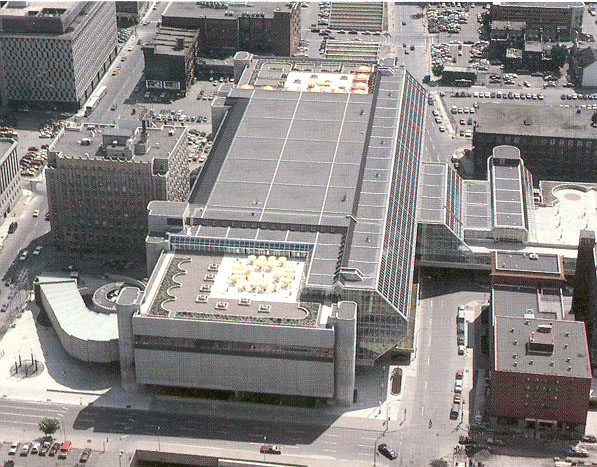 Pageau Morel began a mandate for the construction of the Saint-Jean-sur-Richelieu military base. This megastructure included dwellings for cadets, soldiers, and officers, as well as a swimming pool, a gymnasium, a kitchen, a cafeteria, boutiques, and an auditorium. To facilitate the project, an office was set up in a trailer at the site.

In early 1979, Philippe Lefebvre, who had previously headed the Hull office, returned to Montreal to lend a hand.

In July, Guy Morel suffered a heart attack and Marcel Pageau was also away due to illness. Philippe Lefebvre and Raymond-M. Martin took the lead in their absence.

In 1980, Pageau Morel took part in an architectural competition for the construction of the Palais des congrès de Montréal. The firm was part of two of the five pre-selected architectural teams; the first was headed by Guy Morel, and the second, by Marcel Pageau. In the end, Victor Prus’ concept was chosen, which included Guy Morel. This was one of the last projects Morel participated in before his death on October 31, 1980, at the age of 53.

In addition to the construction projects started in the 1970s, Pageau Morel realized several retrofits and improvements at the IBM plant in Bromont in the 1980s.

In 1981, construction for the Palais des congrès had begun and continued until 1982. The original building consisted of a 9,300 sq.m. exhibition hall and a 4,200 sq.m. conference hall for up to 5,800 people. It also included mobile bars, restaurants, access to the metro, and indoor parking for 500 vehicles.

A new project to expand the sugar beet refinery in Saint-Hilaire started in 1981. This $65-million mandate lasted 3 years and entailed the conception, plans and specifications, construction, and operation staff training.

Pageau Morel was also part of a multidisciplinary team that won an architectural competition to build the $50-million Quebec Palais de justice (courthouse). This 8-storey building had an atrium, administrative offices, courtrooms, and a high-security detention area. Construction ended in 1983.

In 1984, Pageau Morel won the Edwin Guth award from the Association of Consulting Engineers of Canada for the corridor lighting at Palais des congrès de Montréal.

At the office, secretaries were still mainly using typewriters. The first computer-based word-processing software was purchased in 1984. Two workstations were set up, one for secretaries and another for accounting.

From 1984 to 1986, Pageau Morel carried out mechanical and electrical engineering for the Food Research and Development Centre in Saint-Hyacinthe for Agriculture and Agri-Food Canada. This 12,000 sq.m. scientific building included offices, laboratories and pilot plants. The new construction was equipped with an energy-recovery system ensuring high efficiency.

Pageau Morel moved into a converted warehouse at 210 Crémazie Boulevard West in Montreal, the current location of its head office.

In 1985, each secretary had their own word-processing system on a microcomputer.

In 1986, Philippe Lefebvre was appointed President and Raymond-M. Martin assumed the position of Executive Vice-President. The company had more than 80 employees.

The year 1986 was also marked by the arrival of the first computer-aided drafting (CAD) software in Pageau Morel’s offices at IBM’s request. It was a Mainframe IBM 4361 system equipped with CADAM software, worth approximately $1,000,000. IBM had recently given an important mandate to update drawings for M1, M2 and CDM buildings in Bromont. Site surveys on location and drafting of electromechanical systems on CADAM were carried out continuously, 24 hours a day.

Don’t forget to sign up to our blog and receive all our updates!