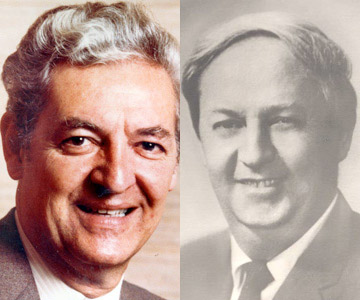 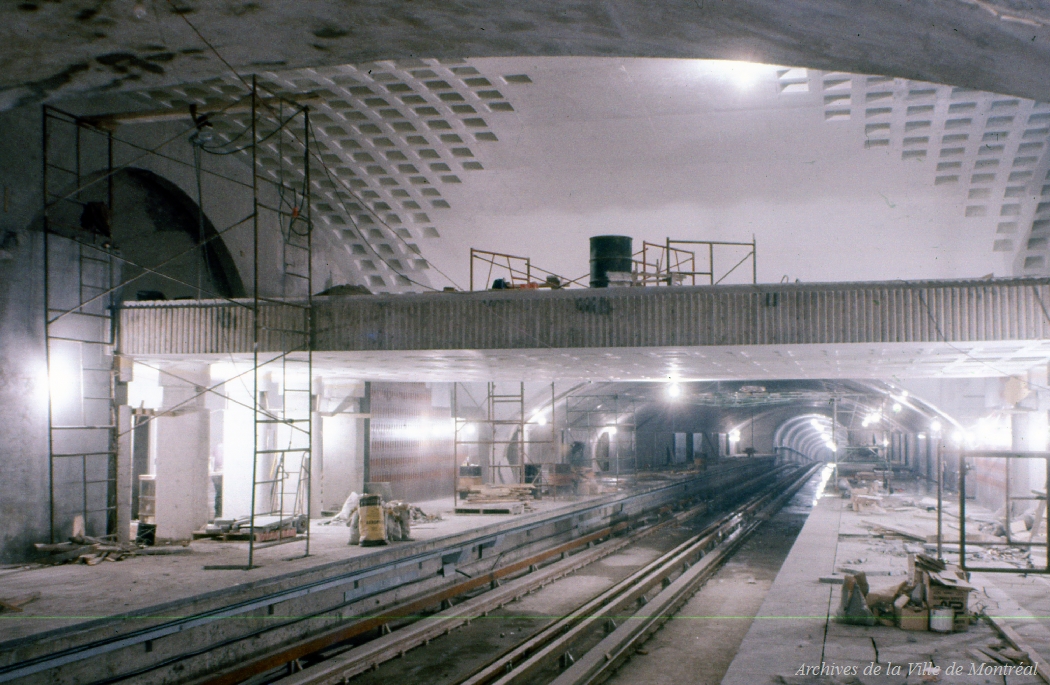 From 1956 to 1966, Pageau Morel managed to gain some prominence. The firm experienced strong growth in both Montreal and Hull-Ottawa regions; the number of employees increased from 2 in 1956 to 39 in 1966 in two regions. Flagship projects of this decade include the Institut Dominique Savio, the Institut de microbiologie de Montréal, Beaubien and Laurier metro stations, the Palais de justice de Montréal, and many constructions for the 1967 Universal Exposition.

Marcel Pageau (1921-2008) completed his studies in engineering at École Polytechnique de Montréal in 1943. He began his career as a transmission engineer at Bell Canada before switching to the consulting field in 1945 by joining the Leblanc et Montpetit firm.

Guy Morel (1927-1980) graduated from École Polytechnique in mechanical and electrical engineering in 1950 at 22 years of age. Following his graduation, he was hired by the Leblanc et Montpetit engineering firm where he met Marcel Pageau.

Marcel Pageau and Guy Morel founded the Pageau Morel firm on May 1, 1956 with an investment of $400 for furniture and $200 for petty cash. Their office was located in Marcel Pageau’s home basement at 110 Liège Street West in Montreal.

Guy Morel quit his second job and joined Pageau Morel full time. Both partners moved into their new offices, a five-room office space at 8527 St-Laurent Blvd. The double living room and bedroom served as a six-table drafting area, the kitchen had two extra drafting tables, and the small office was converted into a secretary's office. A cabinet to store plans was placed in the bathtub. Pageau Morel mainly worked on small projects such as renovations, expansions and estimates, including a hospital in Hawkesbury.

That year, Cardinal Léger organized La Grande Corvée to raise money and recruit volunteers for projects at the Saint-Charles-Borromée hospital, at the Institut Dominique Savio and at the Foyer de la Charité. Marcel Pageau participated in this fundraiser as vice-president of the Villeray-Ahuntsic sector. In order to work on these projects, Marcel Pageau and Guy Morel volunteered their professional services to Cardinal Léger, who granted them a mandate for the Institut Dominique Savio. The Institute was located in a dilapidated building on Sainte-Catherine West, current site of the Place des Arts. This is the first major project for Pageau Morel.

In 1959, Pageau Morel was involved in over 153 projects, including a shopping centre in Sainte-Rosalie. For this project, Guy Morel innovated by using cardboard tubes embedded in the concrete floor as an air heating duct. The technical staff had six members in 1959.

Over one hundred projects were completed this year, mainly evaluations, estimates, and renovations. Plans for a convent in Prince Albert, Saskatchewan, were designed by Pageau Morel for the Sisters of the Presentation of Saint-Hyacinthe. Heating used natural gas, and pipes and foundations had to be installed 11 feet below ground because of the harsh climate.

In the Hull-Ottawa region, Pageau Morel contributed to a dozen projects.

In 1961, the 11-employee company obtained a mandate for the Institut de microbiologie de Montréal located in Laval-des-Rapides. The team carried out many other mandates for the Institute in the following years. Some of the other projects from this year include the Polyvalente Mont-Rolland school, the Beauceville hospital, the Bordeaux prison, the Tanguay prison for women and the Saint-Faustin fish culture station. Many contracts were completed in the Hull-Ottawa region, prompting Pageau Morel to open an office on Kendall Street in Ottawa, which would serve as home base for some time. By the end of the year, it is decided to have permanent employees in the region. Philippe Lefebvre became an associate and got settled in Ottawa.

Over 80 projects were delivered this year, including many churches, credit unions, colleges and convents, as well as Laurier and Beaubien metro stations. In May 1962, Pageau Morel moved to larger offices at 8585 Saint-Laurent. Seven new employees joined the team.

Nine employees were hired in Montreal and two in Hull-Ottawa. The firm carried out the Saint-Jean-Baptiste-de-la-Salle project and many credit unions.

Pageau Morel participated in the construction of the new Palais de justice de Montréal. Originally, the building was set to have 38 floors, but the building height was rejected because of the Old Montreal landscape. The project was restarted after a while as a 19-storey building.

Pageau Morel’s first project for the 1967 Universal Exposition started in 1964: an open stadium built with modular sections in tensioned concrete. Outdoor lighting was provided by 32 xenon tubes of 10,000 watts.

Six new employees joined the team in Montreal and four in Hull-Ottawa.

Construction projects for Expo 67 were in full swing. Schedules were tight and unalterable, creating a year of intense activity for the firm. Pageau Morel participated in the construction of the French Pavilion (which would later become the Montreal Casino), the German Pavilion (later demolished to build the Olympic Basin for the 1976 Games), the Tunisian Pavilion, Habitat 67, and three security building on Notre-Dame and Sainte-Hélène islands which would be used by the police and as emergency clinics.

The Montreal office also had other projects, including the Place d’Armes building, the Banque Canadian Nationale head office, the Quebec Tools Corporation plant, and the La Sapinière hotel in Val-David. The Hull office had over 48 projects, such as arenas, schools, banks, credit unions, churches, and mandates at the University of Ottawa. In 1965, the Montreal team had 28 employees and the Gatineau team had 11.

In addition to ongoing projects related to Expo 67, Pageau Morel received 65 new contracts this year, including a plant in Saint-Hyacinthe, several credit unions, the fit-up of a disco in the Grey Nuns’ old underground vaults, and a report on the ventilation for the Louis-Hippolyte Lafontaine Bridge–Tunnel. For Expo 67, Pageau Morel carried out the Châtelaine House, Africa Place, the Industry and Commerce Pavilion (Hydro-Québec section), the Vienna kindergarten. The Hull-Ottawa office implemented over 35 projects for schools, churches, office buildings, including the Cité étudiante de Hull and the University of Ottawa.