The Firm Wins a Léonard Prize in the Mechanical-Electrical Building Category! 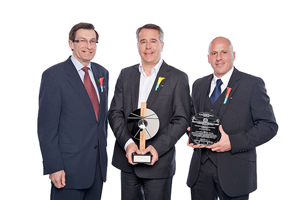 The 10th annual Grands Prix du génie conseil québécois were held last Thursday at the Montréal Science Centre. Under the theme “Apprivoiser l'avenir, un projet à la fois” (Taming the future, one project at a time), 11 projects among 45 were recognized for their ingenious qualities.

At the 2012 edition, PAGEAU MOREL once again received a Léonard prize in the “Mechanical-Electrical Building” category for its project on GlaxoSmithKline’s (GSK) new offices in Sainte-Foy. Geothermal systems, hot and cold radiant slabs, efficient natural and artificial lighting, natural ventilation regulated by weather network, active cooling beams and rainwater recovery were combined wisely and effectively. Strong and motivated teams were able to remarkably integrate many state-of-the-art technologies into an avant-garde wooden structure.

Thanks to an impressive combination of different technologies, this efficient building will be certified LEED-NC Gold (almost platinum), offering a yield that is 52 % higher than a comparable building. By their passion for innovation, PAGEAU MOREL’s consulting engineers were able to meet and even surpass their client’s high goals, all while respecting planned schedules and budgets.

“Thank you to André-Pierre Ghys, project manager at GSK, who knew to set high objectives from the start, especially in terms of sustainable development,” highlighted Jacques De Grâce, project manager at PAGEAU MOREL. Mr. De Grâce also thanked and congratulated the members of the architectural team at Coarchitecture, as well as all the other participants who contributed to this surprising, ecological and efficient technological showcase!