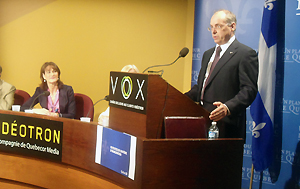 As part of the unveiling and signature of the Agreement between the Department of Immigration and Cultural Communities and Ville de Gatineau, François Laframboise, Vice-President Eastern Ontario | Western Quebec at PAGEAU MOREL, offered the firm’s testimony about the reception and integration of immigrants in companies.
Mr. Laframboise was invited to discuss, in front of the media, his satisfaction regarding foreign workers and the challenges of their integration. He also emphasized the need for government subsidies and support in reaching an optimal integration.